Some time has passed since I last spoke with you about updates to our Software Roadmap. Since my last communication, the team has made excellent progress and achievements for our membership base.

Since the initial update in January, the Network's Executive Council has restructured. In short, this now means that the Development Operations Department is solely under the daily responsibility of one Executive Council member instead of being a collective responsibility of 5. I am excited that the Board of Governors selected me to oversee these teams alongside my recently appointed assistant Marios Aristodemou, as we continue to update and improve our infrastructure.

The Development Operations team have continued to work tirelessly to improve stability, availability and offer modern infrastructure for the network. The introduction of technology which increases and decreases its own resource pool automatically to ensure an improved uptime and continued availability of our services without the need for manual human interference is just one of the introductions we have made.

I hope you enjoy reading some of the exciting developments which have been released and those that are due in the future.

What has changed since the Q1 update?

World Server is probably the most significant addition to the Network in this decade. Since its release on 30 April, the World Server has never automatically restarted or crashed and has finally provided the network with a stable flight server it truly deserved. Whilst there were some initial bugs when we went to public release, I am thankful that the developers were at hand and able to apply patches early on, which saw most ironed out in the first few days. The ownership of the coding for these servers belongs firmly to IVAO, thus enabling us to pave the way for a modern network environment with the expected features of this era. Gone, thankfully, are the days of our SHARD servers crashing multiple times a day.

Back in January, we spoke about the importance of Aurora for Windows being stable. Members around that period reported regular crashes or freezing; since then, the developers have continued to improve, streamline and make the current version of Aurora faster. Our team has been working internally with other developers to introduce Voice ATIS (see further) and prepare us for the departure of TeamSpeak2 and the arrival of our new voice servers. For the foreseeable future, we will continue to maintain Aurora's stability on the various configurations it is used for before we commence adding new large-scale features.

Status: In Staff Alpha
Due: September 2022

Great progression has been achieved with Aurora for Mac/Linux. The software has grown from the ground up and is now in a stable position to have entered an Alpha Test phase with a group of network staff members and continues to make headway on a daily basis, being developed and expanding the test base across various Mac/Linux installations.

The next enhancement for IVAO is just around the corner. The required work to Aurora and Altitude has been completed and is currently with the whole network staff team to test the systems out on different installations and configurations to eradicate any early bugs.

The feature will broadcast an ATIS from airport positions utilising the latest version of Aurora and deliver the current weather and any personalised information the Tower Controller, or any adjacent controller if there is no Tower Controller online, adds (such as taxiway closure or procedural information) to pilots.

End of technical support for IvAc and IvAp

At the start of June, we dropped technical support for legacy software such as IvAc and IvAp - this does not mean the software cannot connect to the network. If you still face an issue, then our only recommendation will be to move to our latest software offering. Dropping the technical support for these legacy systems is the start of a long-term plan to phase IvAc and IvAp out of IVAO and enables us to bring forward new features for the network, such as voice servers, for our members to enjoy.

We will provide sufficient notice for the date at which legacy software will no longer be available to connect to the network, but we strongly encourage members to move forward with either Altitude or Aurora sooner rather than later to ensure technical compatibility and enable our User Support team sufficient time to assist you with any issues you may face.

Details on how to contact that team can be found in the closing section of this article.

With the release of World Server, we were faced with the need to either recode the old status badges to integrate them into the new servers or utilise the time bringing you something new. We opted to get rid of the dated badges and introduce a more modern look. You can access the newly released status badges by visiting https://status.ivao.aero. All the same features of the original status badges in a more modern and technological look.

What is planned for Q3 and beyond?

With the release of Voice ATIS imminent, the next step is Voice Unicom. This will be the first pilot-to-pilot voice integration to IVAO ever, that does not rely on a third-party piece of software such as TeamSpeak. The concept, on paper, shall be very simple - the ability to broadcast your intentions to other pilots by voice within the vicinity of your aircraft but the difficult aspect of implementing realistic range and the distortion of radio messages due to the obstruction of terrain is the more technical one. Once Voice ATIS is released to you, our members, we can focus on the release of this exciting chapter.

As a precaution in April, following a cyber attack against IVAO’s systems, we removed parts of our legacy website, including our Training System. The Development Operations Department, alongside the Data Protection Officer and the Information Technology Officer of IVAO’s NPO, are working closely to return all aspects of the legacy website with thanks to Eric Olson for finding a solution to enable the systems to return. We, at present, do not have a final timescale for the return of these services but hope to update members as soon as possible.

A new Training System for IVAO

Back in May, the Central Services team, on behalf of the Training Department, announced the new philosophy for the future of Training and Ratings on IVAO. The Website Development team is now underway with the creation of a new system, in line with this new philosophy, and making excellent progress as each day passes. We wanted to publicly thank David, Elodie and Jann for their involvement, focus and dedication to delivering this exciting new project and assisting with bringing the biggest change to IVAO’s training since the start of IVAO in 1998.

As part of our public announcement regarding the suspension of technical support for IVAO’s legacy software (IvAc and IvAp) we were contacted by members of our community who utilise intricate home cockpit systems to enjoy IVAO. As a commitment to ensure we maintain all members of the IVAO community as we move forward, we are seeking to further develop Altitude to enable its use by users of home cockpit and virtual reality equipment. We understand the current restrictions that Altitude has and members of our Software Development team are looking into how solutions can be implemented to enable them to use Altitude to enjoy IVAO.

One of the largest perks of being a member of IVAO is our amazing traffic library that comes as part of the network’s software offering. With compatibility from Microsoft Flight Simulator 2004 through to the latest Microsoft Flight Simulator, it truly enhances the experience of our community whilst connected to the network with a great variety of aircraft and liveries to offer that ‘as real it gets’ experience.

With our current MTL library (FS2004, FSX and P3D) we continue to seek new AI models to introduce new aircraft and liveries to our library. If you feel there is a model missing, you can recommend the introduction to the MTL team via their dedicated forum.

As part of our commitment to continuously improve the immersion for the community, we are introducing some serious changes to the traffic library in Microsoft Flight Simulator thanks to our MTL team member, Aldo. Members will shortly be able to enjoy custom light mapping, handcrafted models of military aircraft, engine exhaust effects, contrails, dynamic lights and improved 2k livery textures.

📖 You can read more about this release in the latest Virtual Sky article.

We, as always, want to emphasise the respect for the time and dedication all staff volunteer to the network and in particular, the staff within Development Operations. We have made some major feats in the last few months and there are many more to be achieved across the rest of the year with our technical landscape being overhauled.

The network appreciates that technical issues can arise, but what is most important for us is that our members get the support they need. We have a dedicated team of knowledgeable User Support members who are standing by to assist with any technical queries or concerns you may have on a one-to-one support basis. Whether you cannot connect to our servers or your MTL is not showing up, the team has all the tools to assist you. They can be contacted in three different ways; the quickest is via the IVAO Family Discord, you can email devops@ivao.aero or post on the forum.

We, finally, have the stability we always wanted with our flight server and will shortly have the features of voice servers to complement this to offer a truly enjoyable experience for our whole community. This has been quite a substantial update and we thank you for taking the time to read it in its entirety. As before, we’ve opened up a forum topic for people to discuss the update and ask any questions they may have.

On behalf of the Infrastructure Services Team, 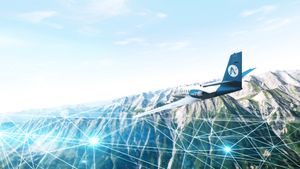 
Meet the man behind the trailers - Maurice from AviationLads